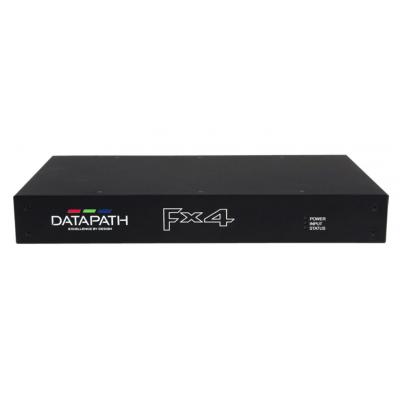 Advancements in digital signage allow much greater freedom in creating and deploying any scale signage projects. At the forefront of this is the Datapath Fx4 a multi-faceted stand alone display controller. The Fx4 supports a choice of inputs high bandwidth loop-through as well as 4 genlocked outputs in either DisplayPort or HDMI.

Each output monitor can take its input from any region of the input image as all of the required cropping scaling rotation and frame-rate conversion is handled by the Fx4 hardware. These regions can overlap to allow any output to replicate another or can be configured to support any creative splice of the source material. This allows the support of many non-rectangular screen arrangements as well as any mix of monitor orientations allowing users to create an almost unlimited multi-monitor canvas.

The Fx4 also allows users to pre-load an image for immediate display in those cases when the media source or cables malfunction and no signal is being received.

Datapath’s hugely popular multi-screen design tool Wall Designer has also been updated to incorporate Fx4. Wall Designer allows users to add displays from the ever expanding database of monitors visualise their content by adding inputs and adjusting display regions and finally instantly program all Datapath Fx4s either via USB or the network ports.

Central AV, are one of the UK’s leading presentation and display system suppliers, with a depth of knowledge across a wide range of brands.  From projectors to digital signage, we work with trusted international brands to offer the latest professional equipment to different sectors in the UK.

Thank you for your interest in Central AV, please call one of our advisors to discuss your audiovisual and video conferencing requirements.